It all used to be oh so simple for pubs in the BM (Before Micropubs) era.  Take Solihull and its surrounding villages for example. It’s my home town but it wouldn’t win many awards for the “must visit due to the quality and diversity of beer along with its historic grade II listed pub buildings…” if there was such an award of course.

In this era, 179 – The Vaults B93 0JU stood out like a beacon just off Knowle High Street and bagged the Solihull CAMRA Regional pub of the year ten times between 1992 and 2013.

Back in 2013, Mike Benner, of CAMRA, said: “These winning pubs have been voted the best in their local areas by the local CAMRA members and are examples of the kind of well-run and valued community pubs we hope to see more of throughout the UK.” 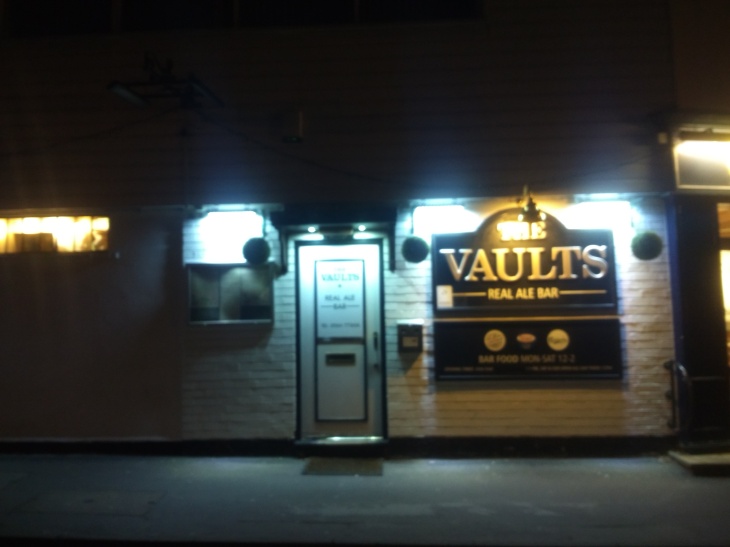 Luckily for The Vaults there has only been two Micropubs open in the Solihull region in the AM (After Micropubs) era, so they haven’t been under the cosh like other regions with micros seemingly making a relentless charge on the GBG with their offerings of many ales and no TV.

The Vaults and Knowle in general is still booming and easily the best suburb of Solihull for a drink with pubs such as pukka place by the canal The Kings Arms, drinkers place by the canal The Black Boy both featured in this post… https://lifeafterfootball839.wordpress.com/2017/08/14/harry-or-charles-when-nature-callswalking-in-warwickshire-part-1, whilst also containing an Ember Inns boozer with a proper drinking area and funny locals (really) The Red Lion and, new kid on the block, The Ale Rooms that I noted in this post… https://lifeafterfootball839.wordpress.com/2017/08/14/people-make-pubs-walking-in-warwickshire-part-2.

But, Solihull CAMRA Pub of the year in 2018 is The Vaults aforementioned near neighbour The Ale Rooms whilst in 2017 it was the only other Micropub in the town, The Pup And Duckling! https://www.solihull.camra.org.uk/viewnode.php?id=49619

So, it’s fair to say, for the first time in a long while The Vaults has a bit of competition on Knowle High Street and I wondered how it would respond when I visited on a Sunday afternoon probably around six weeks ago now.

It’s a very lively boozer and doesn’t feel like a Micropub but most definitely a local pub.  It’s the sort of place where Carling sells in equal measure to their ales and the pub is none the worse for that.

The Gaffer was behind the bar in a top notch red Tacchini tracksuit top that I haven’t seen for years and a Peaky Blinders style cap and was clearly having an enjoyable Sunday afternoon with his crew of regulars.

One of the reasons I like Knowle is that whilst it is regarded as a salubrious suburb of Solihull it most definitely has lively pubs and this place was buzzing with that late Sunday afternoon drunkenness I can only describe to people who’ve been there.

It meant I wasn’t really in the loop for humour but no one gave me a hard time, or acknowledged me for that matter, but there was no hassle and a cracking mix of ages of people being boisterous.

I had a very tidy pint of Butty Bach (Wye Valley) for £3.50 and places like this don’t survive as a Free House for this long without building up a good posse of regulars and the ale aficionados.

The Vaults is a bit of a Knowle institution really (along with the Red Lion and The Wilsons Arms – a Toby Carvery I’ve yet to blog on!) and the addition of The Ale Rooms should hopefully complement it rather than take trade off it.

That certainly wasn’t the case when I visited as it was nicely full and had a TV in the background (like The Ale Rooms) and is clearly ensuring it stays on top of its game to continue thriving in a busy little village well stocked with boozers.

9 thoughts on “The Vaults Rising To The Challenge”