Any loose reference to the Sex Pistols only album of note (although it did miss off Friggin’ In The Riggin’) is always an attention grabber and it’s probably still on the Billboard Chart in the USA so Dave will know what I’m talking about…Dick just likes Bob Dylan.

I was hoping to save this blog title for the terrifically named Jorrocks bar in Derby but I’ve still not been there, so it’s going to have to wait.

In all honesty, there really isn’t a lot to write about some boozers and that doesn’t mean they are bad, just lacking in BRAPA style shenanigans when I pop in.

Case in point yesterday afternoon, or rather around 5pm when I visited 417 – The Kings Head DE65 5GG on the main street in Hilton, a suburb of Derbyshire.

Hilton’s got at least 8,000 punters now and the new builds keep on coming. I reckon Duncan might well have watched Hilton Harriers on his groundhopping escapades as they have a Saturday afternoon team in the Central Midlands Football League (South Division), which isn’t bad for a club that was only formed in 1992.

Houses keep sprouting up everywhere and it loosely borders Willington, Tutbury and Etwall all of which seem to have a far better selection of boozers.

Don Amott Leisure Kingdom is based in Hilton. He’s the man who’s famous as the king of Caravans (you must remember the advert from seventies) and it’s become a commuter village for Derby or Nottingham nowadays.

For the size of Hilton it’s got a dearth of pubs although The Old Talbot is a classic of its kind and one of the oldest buildings in the village.

Your other traditional boozer option is further up the Main road on the opposite side and is a long narrow building that was ticking along nicely.

Groups of drinkers, diners and couples on the lash left the atmosphere suitably upbeat; with some nondescript background tunes. 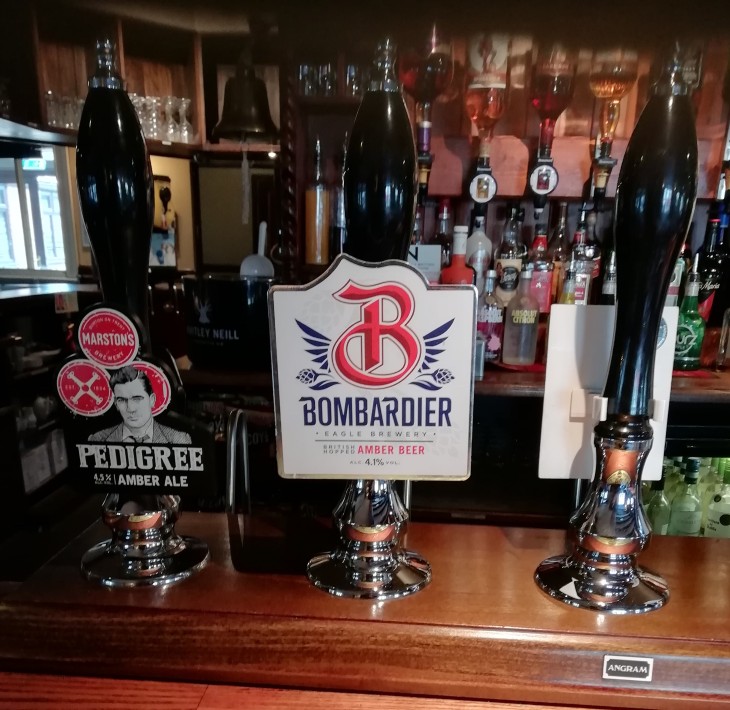 I had a choice of Bombardier, which is brewed by Wells, now known as Eagle Brewery but, ostensibly, brewed in Burton or a pint of Pedigree.

I plumped for the former but, even with my untrained palate it tasted as though it was on the turn…

I know Martin has given up recently taking back any below par cask on his tour of Wales here and here.

In fact, he’s decided to join the rest of us and is now blogging about Carling only pubs in the Black County and has become a craft keg convert.

However, I approached the barmaid and once she assured me it shouldn’t be on the turn, she was more than happy to give me a fresh pint of Pedigree (Marston’s) and promptly tip the Bombardier down the sink.

So, a standard village/suburb boozer on a main road with a decent atmosphere and prepared (I won’t say ecstatic) to change cask on the turn, is always the sign of a decent boozer.  Other punters were ordering Carling and Guinness whilst I was there so it’s a proper pub…

I’ll be intrigued to see how Hilton shapes up over the coming years with more houses proposed as I reckon the shopping precinct is bound to have a shop unit free soon and a small boozer will definitely be on the agenda as I reckon there is still an untapped market here.

The Kings Head, like The Old Talbot over the road are here to stay ad with a Generous George boozer in the shopping precinct it just needs one more I reckon to complete the set of 21st century big suburb pub options.