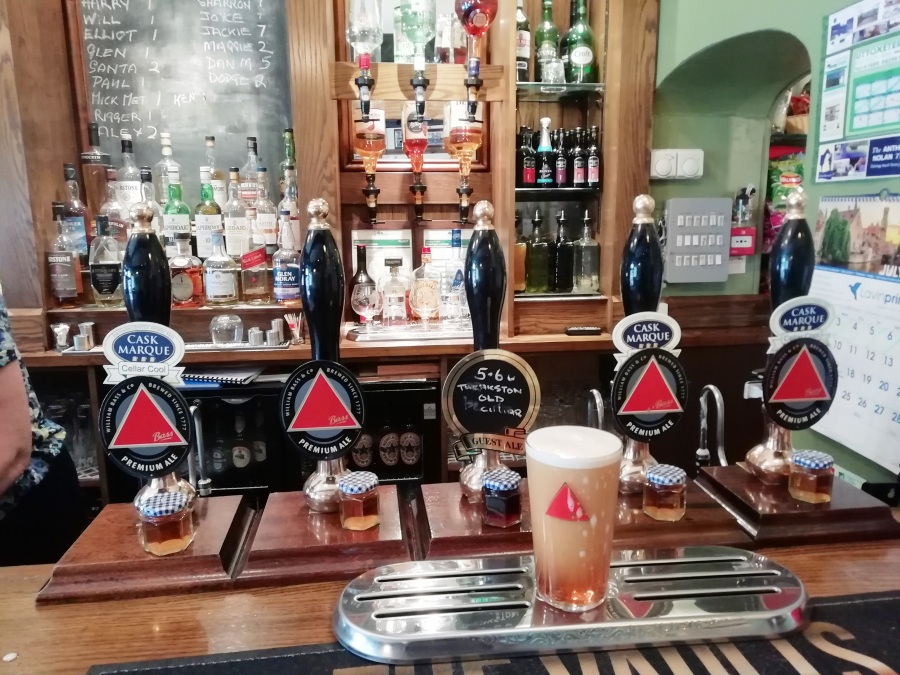 You left me in a proper boozer on the outskirts of Solihull (no that isn’t a typo Russ, it’s true) and staying with the theme I turned up about three weeks too late to the Beer & Pubs Forum Proper Day Out in Uttoxeter.

Of course even if I’d turned up early then I wouldn’t have beaten Stafford Paul who was almost on home territory and, according to the rules of the B&PF, must be first into every boozer. 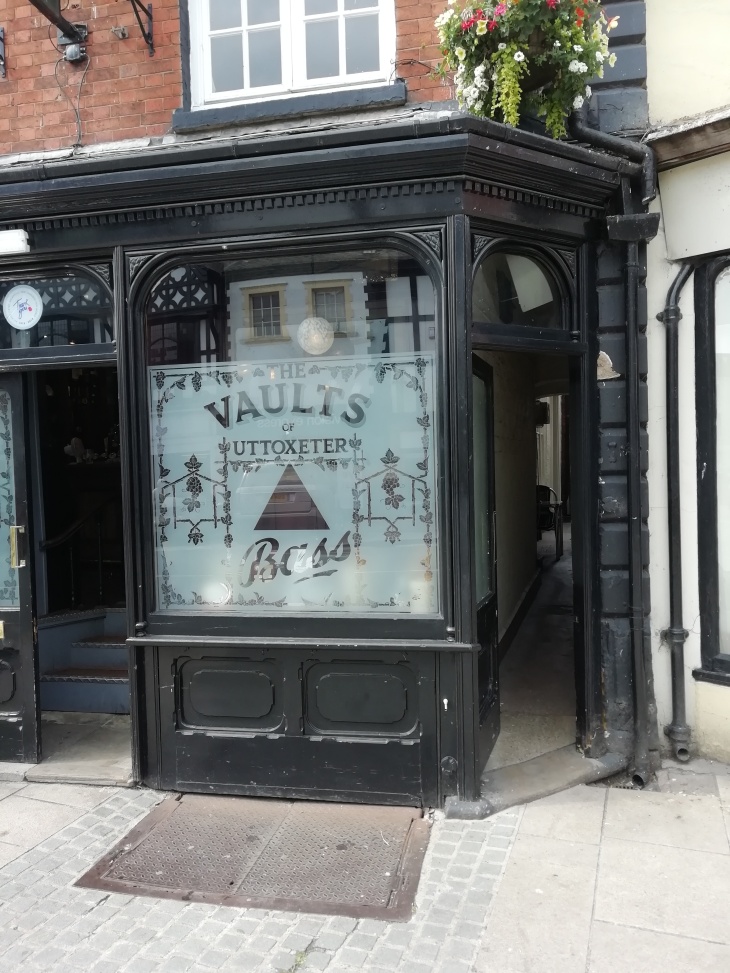 The day out in Uttoxeter, featuring the remarkable conversion of Pete Allen from Carling drinker to Bass sommelier, is captured perfectly by Mudgie here.

Whilst Martin missed this particular jaunt he has, of course, covered Uttoxeter extensively and in his role as Micropub ambassador he visited the aptly named Horse & Dove. 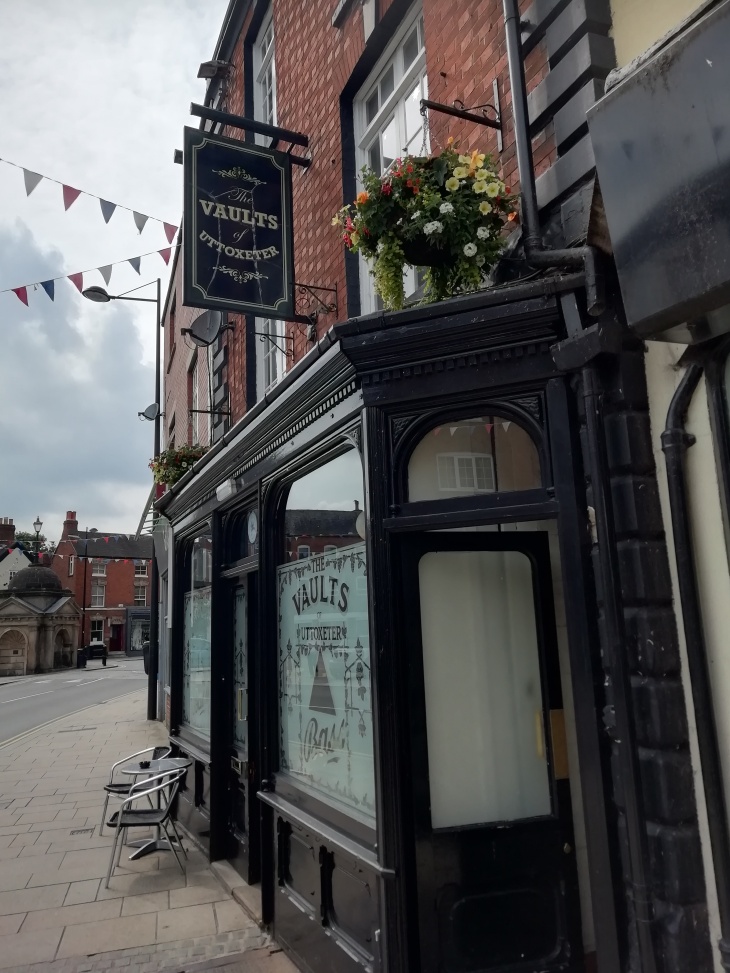 I say aptly named as Uttoxeter is famous for its racecourse but not a lot else – apart from being the second most likely town Stafford Paul will drink in.

I’ve only been once before in almost two years of blogging and recalled the Fry and Laurie piss take sketch about how they are going to put Uttoxeter on the map.

That was at Ye Olde Talbot, a classic boozer with a dog called Elvis trying to leave the building, great Bass and M&B Mild beermats, fairly bog standard for Uttoxeter really. 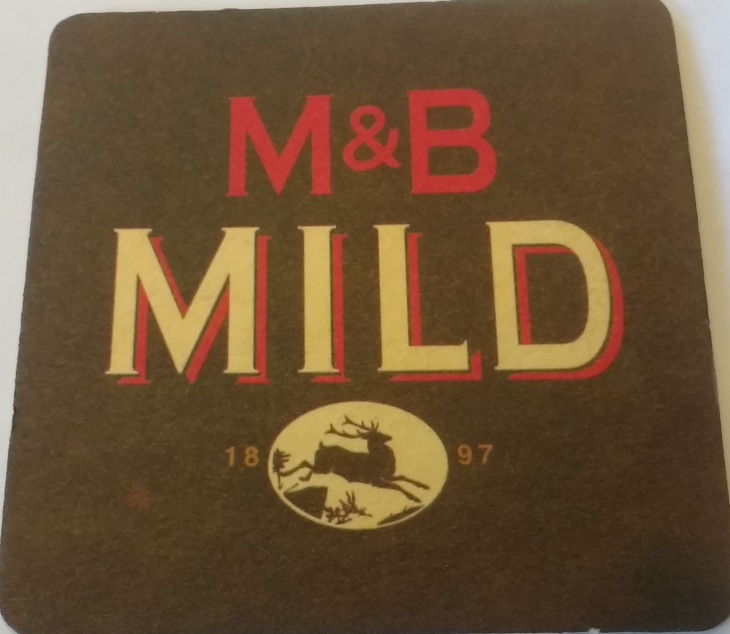 In the best possible sense this is a town in a time warp and 429 – The Vaults ST14 8HP in Market Place, is happy to enforce that stereotype.

(A rare pic of an under 50 in Uttoxeter) 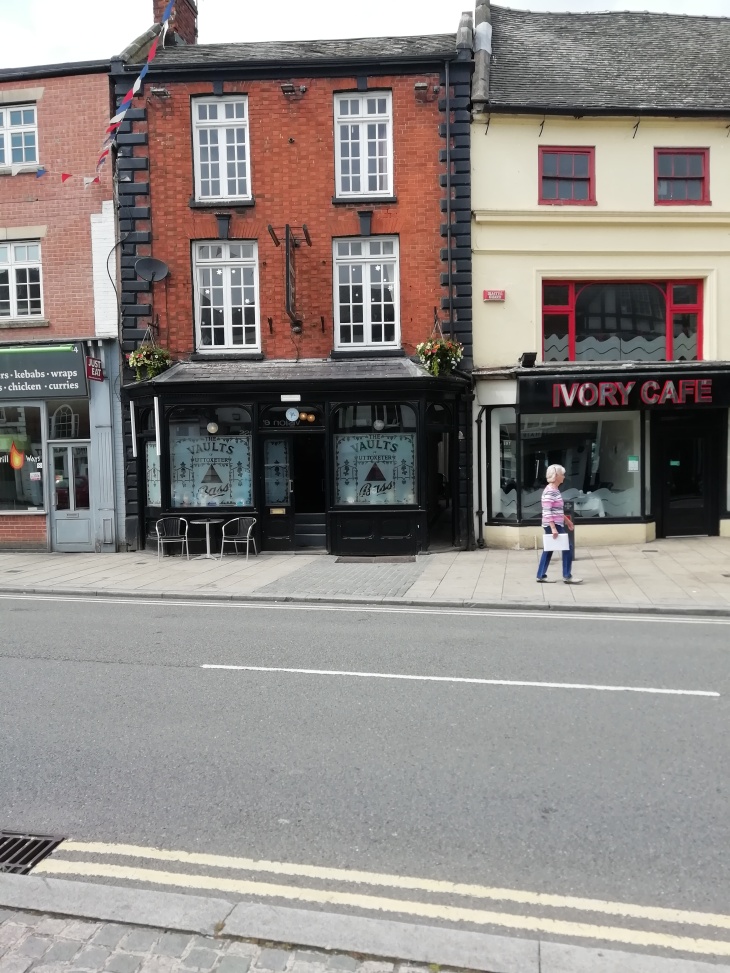 It’s a linear sort of place as it has four punters; four punters all drinking Bass from four Bass Hand pumps at around 4pm on a Monday afternoon. 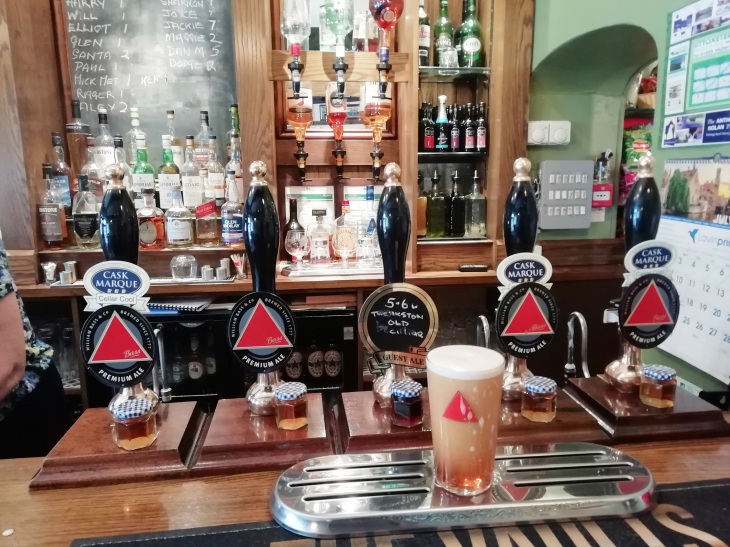 However, whilst I am yet to hit the half century mark the rest of the clientele are definitely septuagenarians and the conversation reflects this. 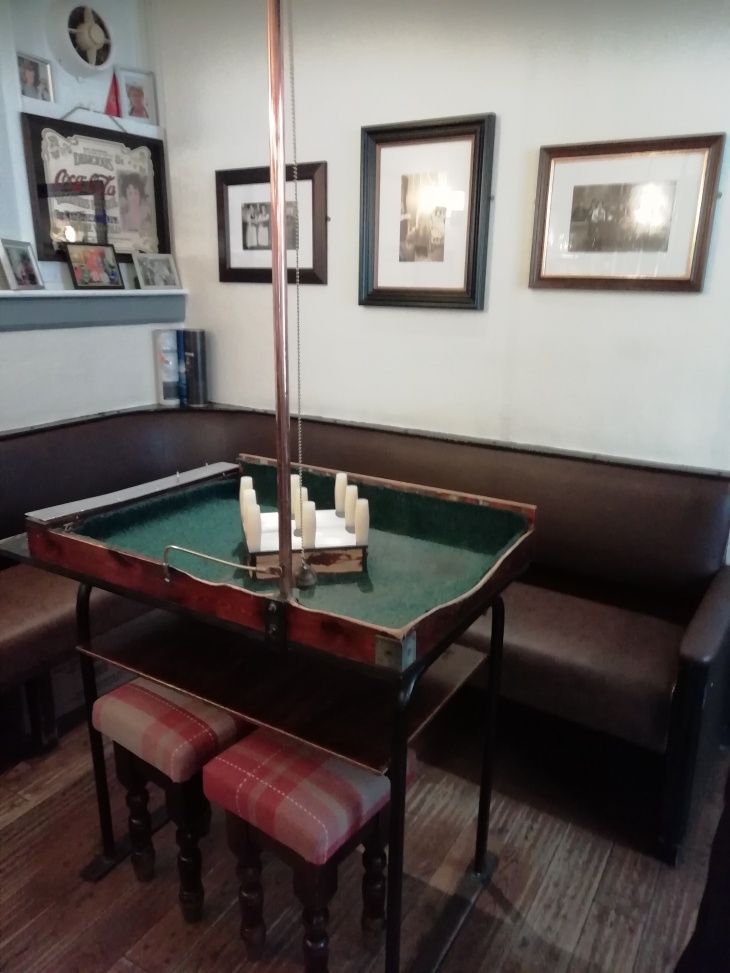 Two of the old boys in the back are playing skittles, I checked but they both appeared to be younger than Mark, who is at least 95, so it can’t be him as he was last seen playing at The Dog and Gun in Syston.

Jackie, the barmaid, was great value and really chatty and I found out she played for another pub darts team but had agreed to miss out on a fixture to do an extra shift to cover the race crowd due in tomorrow night!

(Jackie is NOT part of this team…) 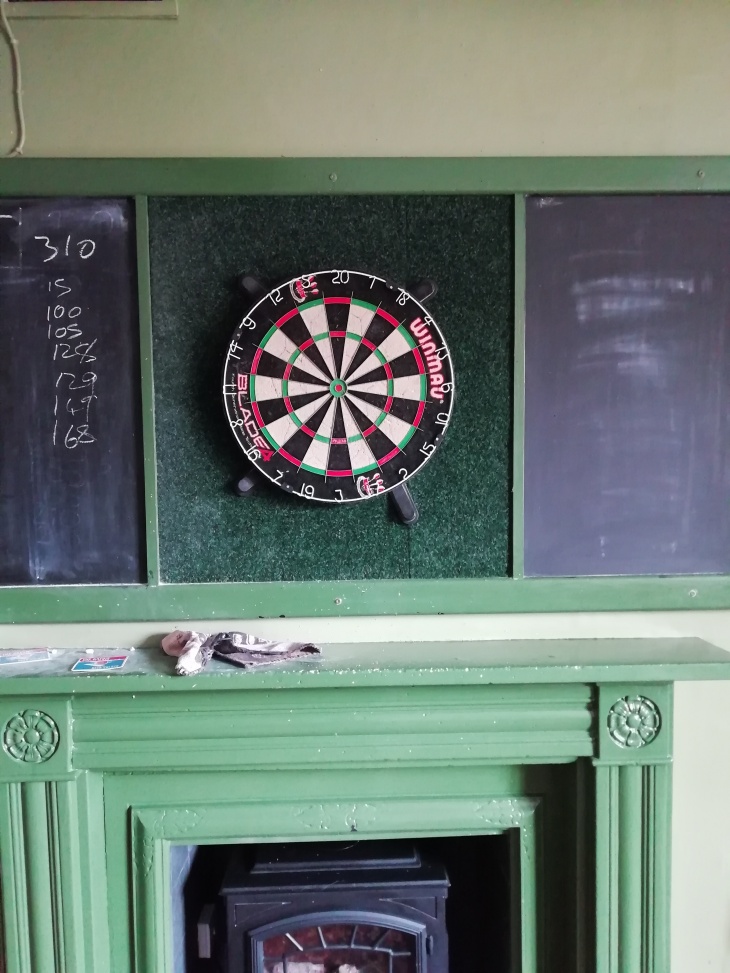 The old boy sitting opposite was waxing lyrical about Roy Orbison and apparently he had watched him in Hanley back in the sixties with The Beatles and Billy J Kramer.

Anyone under 40 won’t have a clue what I’m talking about of course but I reckon, BRAPA and Rachel apart, the average age of this readership is around 60 but Dick and Dave of course lower that age bracket. 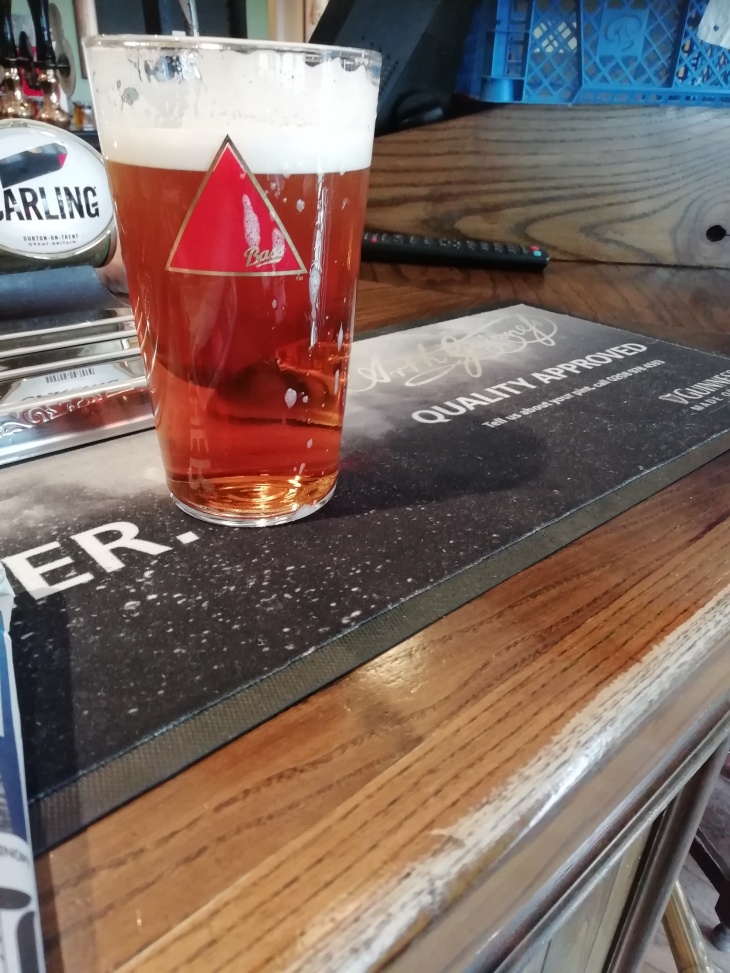 Anyway, the old boy reckoned the Big O was better with a guitar than Jeff Lynne which, to a Blues fan, was a non-starter but I heard his argument.

It was a convivial atmosphere and Jackie was waxing lyrical about the nearby village of Abbots Bromley whilst the old boys moved aside to let me take a picture of the skittles table. 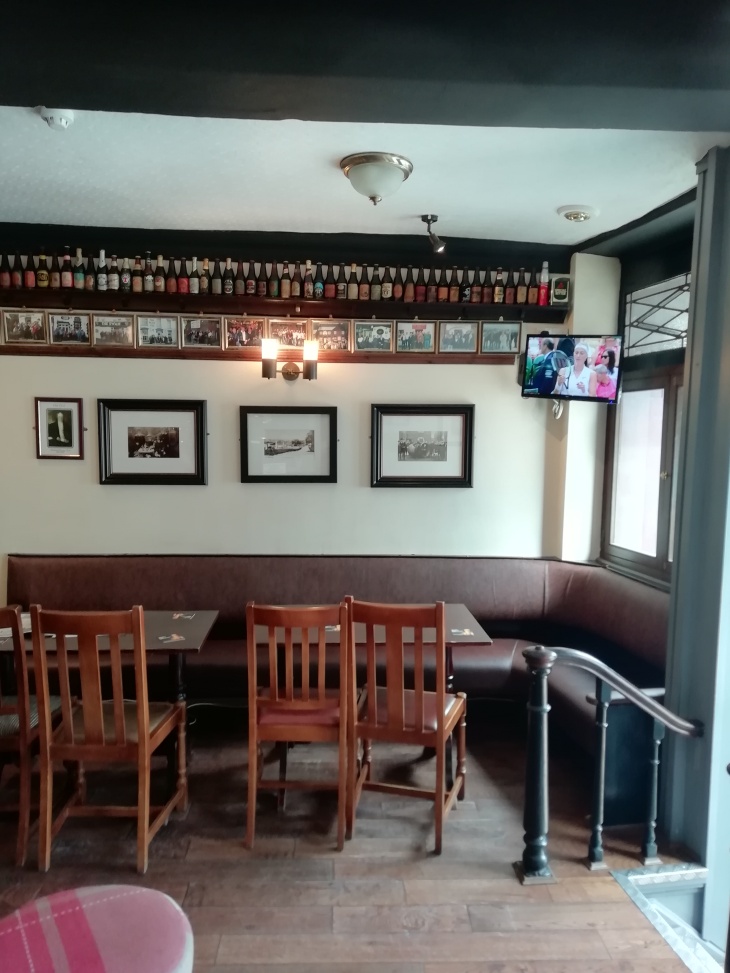 Wimbledon was on the corner of the pub on a screen that you needed glasses like Mr Magoo to see clearly (that could just be me) as Johanna Konta marched on and it felt like a ‘proper pub.’

There was no danger of any plant feeding here as the Bass was absolute nectar and proof that less is more in terms of what punters want.

Richard would have disagreed of course and I’m sad he isn’t here to do so, but there is no denying this is a cracking boozer.

I really should get myself on the next B&PF ‘Proper Day Out’ as this Grade II listed place is a gem.

27 thoughts on “Less Is More In Uttoxeter”