After leaving you in Kegworth I thought it would be good to start with the news that Blues have finally made a signing this summer.

With Monk, Jota, Morrison and Adams all gone and only season long loanee Gary Gardner (who was excellent) coming in the other way, then it looks like being a season of toil for Small Heath Alliance.

Mind you, with the news that Blues have signed Sadler’s Brewing Company Peaky Blinder Lager to advertise on the back of the shirts then the campaign is already looking brighter. 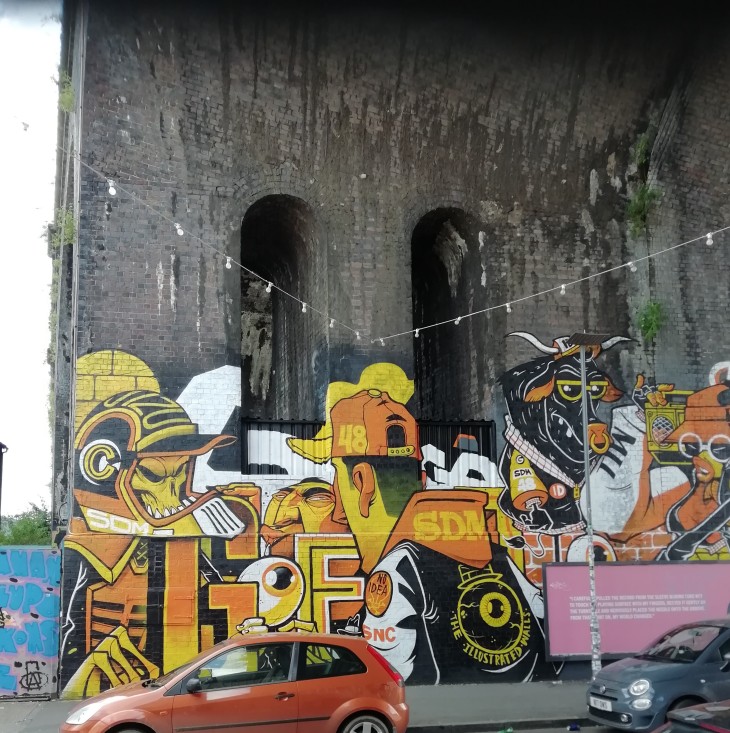 Apparently, it will be on sale at the ground so punters can watch  the match with a warm glow knowing we are swilling top quality lager from a local brewery. 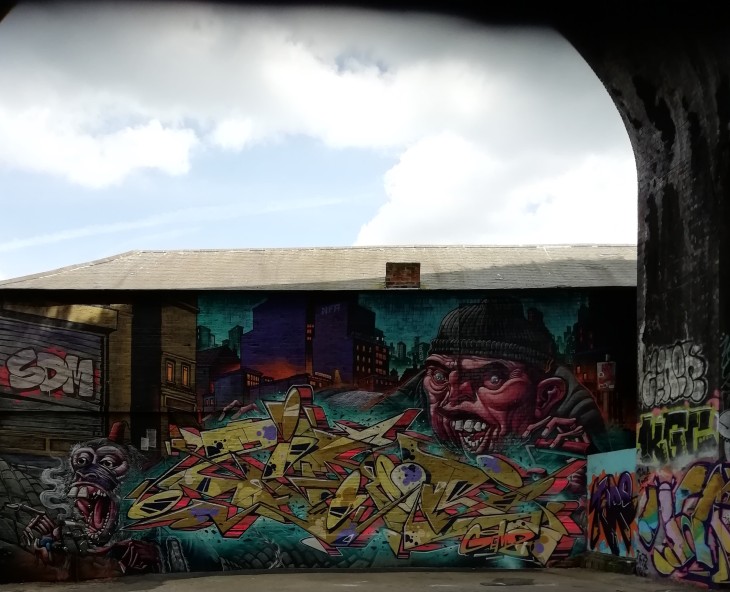 We might even see further signings as Peaky Blinder IPA, Peaky Blinder Pale Ale, Mud City Stout and Hoppy Days must be in the pipeline so, despite any new players, the summer is looking brighter! 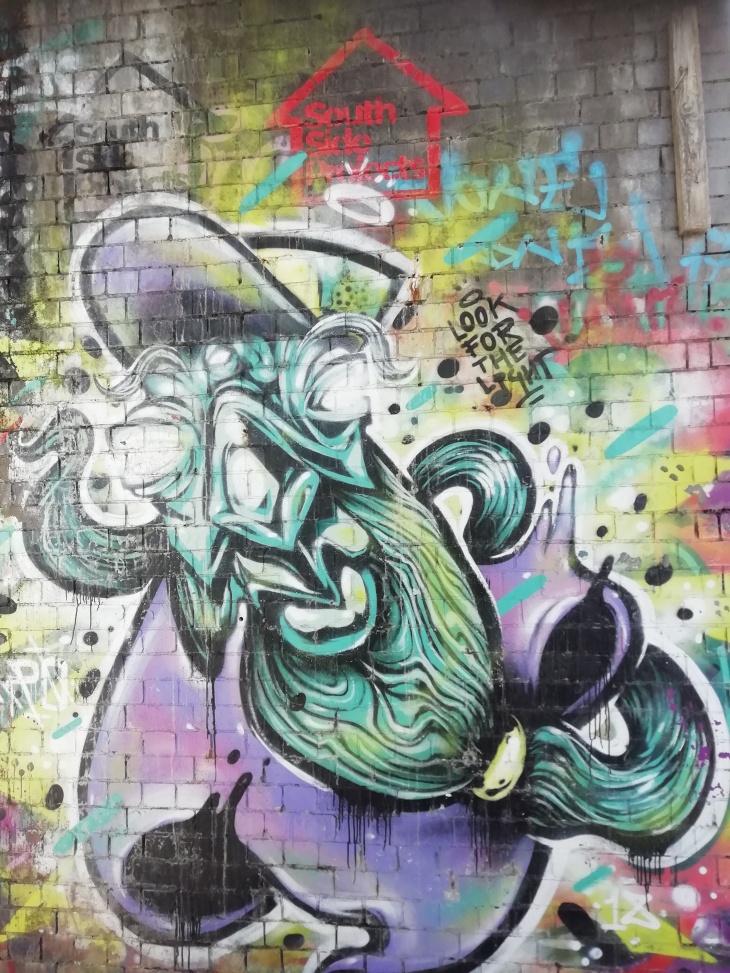 Of course, most of the boozers near St Andrew’s have disappeared over the years so a lot of fans head for Digbeth for pre-match watering holes nowadays.

You’ve got to love Digbeth and despite the city council’s best efforts, it hasn’t been gentrified just yet. 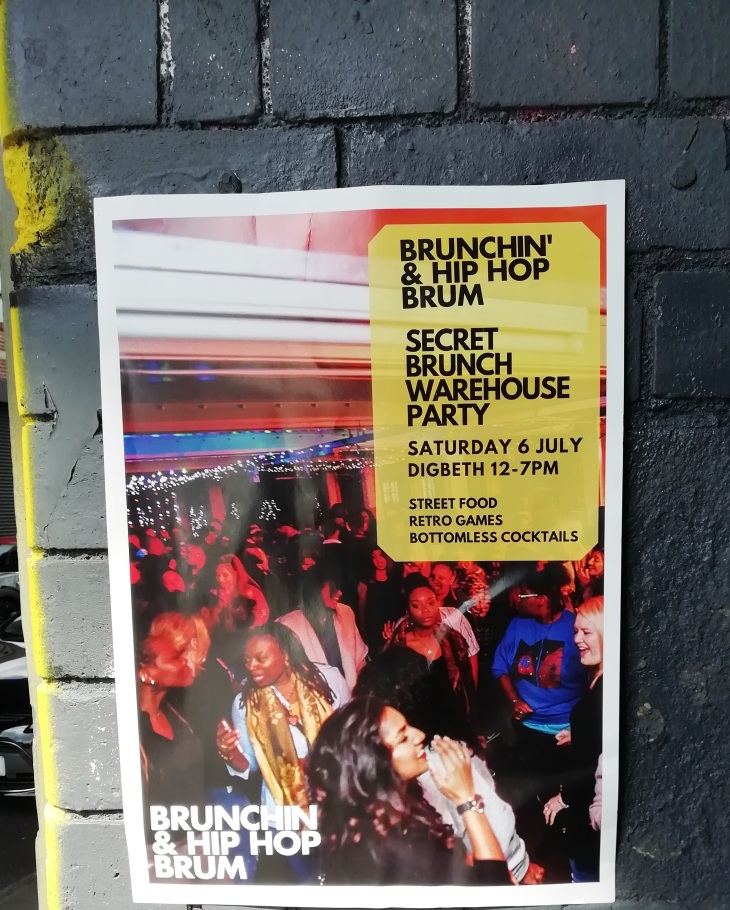 It’s like a bigger, better more Bohemian version of Moseley and the Custard Factory in particular is a riot of colour. 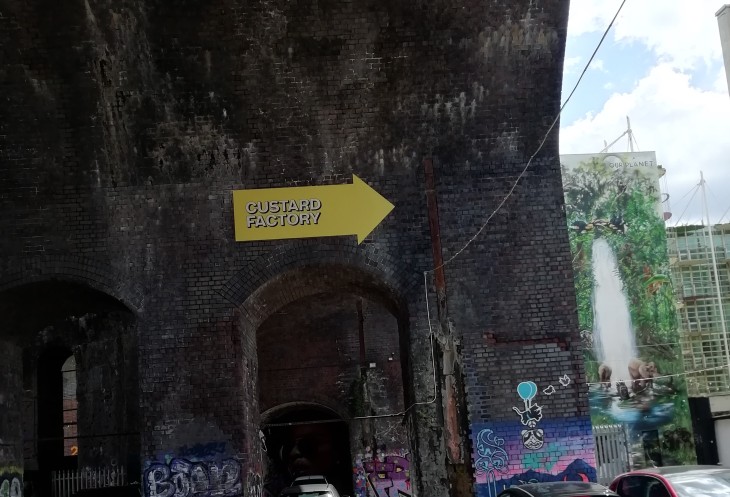 It’s the sort of place that Mark Crilley would be in his element and he would be pleased with this true to life painting of Martin.

There’s lot to like in Digbeth and despite an ever diminishing stock of boozers there are still some classics left.

433 – Big Bulls Head B5 6DY is one such pub on the corner of Milk Street and Digbeth High Street. It’s now firmly on the agenda for most Blues fans pre and post-match but it is by no means a ‘football’ pub.

It’s more of an Irish style boozer that Digbeth was famous for and with me visiting at around 3pm on a Sunday there are plenty of pubs on the edges of the city that are closed.

Not this one however and I walk in to find a cracking atmosphere with the barflies galore and some younger lads and their girlfriends knocking back plenty and regularly popping out into the sun for some vaping. 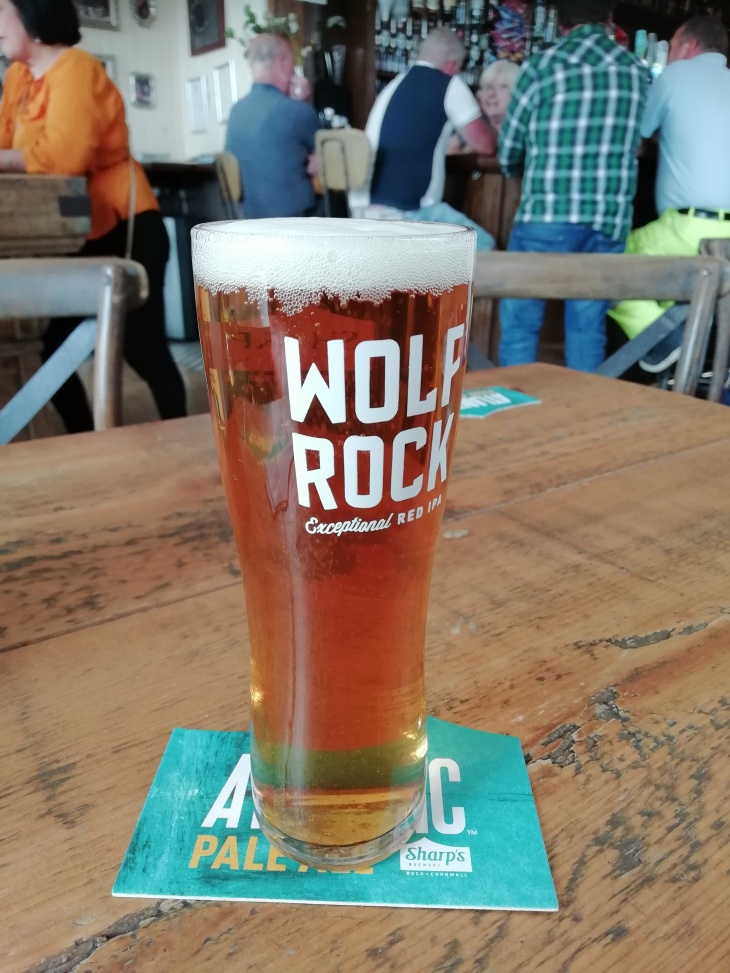 This pub has been covered extensively by Martin during a Beer and Pubs Forum Day Out along with versions from Mudgie and Pete who appeared to have as good a time as I did.

In fact, Martin’s piece had some particularly good pictures so I took the liberty of pinching his Atkinson’s Ales mirror snap, that is still standing proud in the bar (the mirror, not his picture).

It was a lot fuller, which was good to see for a Sunday afternoon and it was definitely a locals’ pub and people on it for the weekend post Saturday and pre Sunday evening.

I had a very good half pint of Keg Atlantic (Sharp’s) which hit the spot as it was piping hot outside and in. 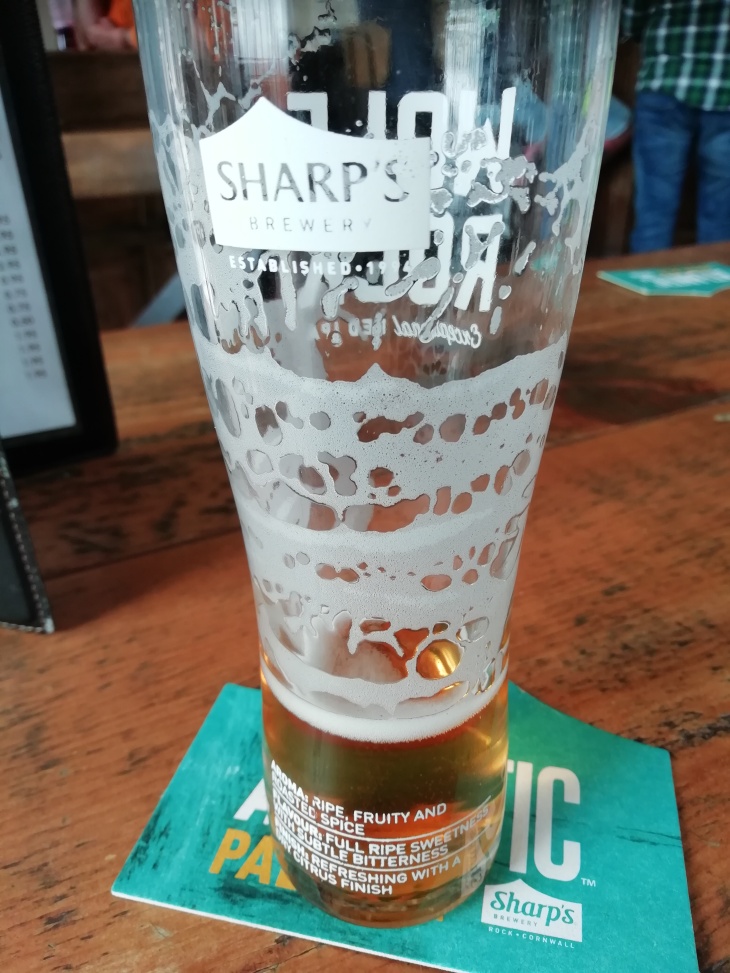 Arguably the highlight for me was when a couple came in, I suspect from the nearby coach station, clearly expecting a Broad Street/Mailbox/Selfridges style vision of the Birmingham pub scene and were somewhat astonished to see a normal Victorian style two roomed boozer full of drinkers. 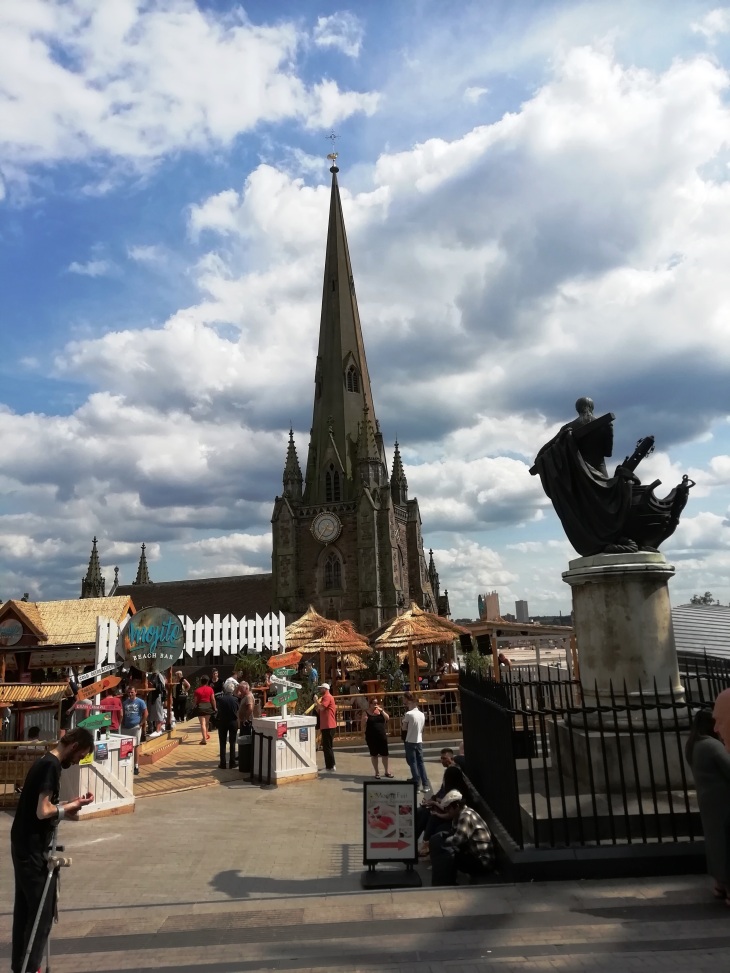 He looked ready to scarper but, to her credit, she put down her pashmina and went for the menu to order some people Sunday pub grub and no one batted an eyelid. 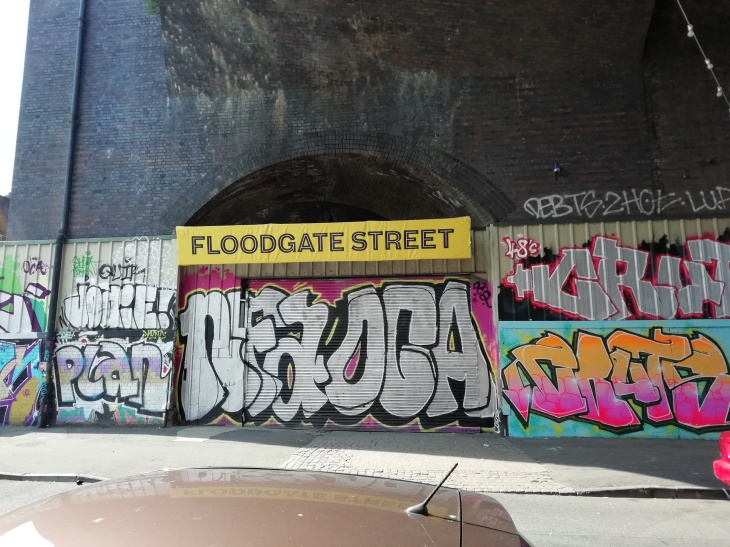 You’ve got to love Digbeth as it still the ‘market’ end of Brum and always will be even when they are palmed off to one of the suburbs.

and The Custard Factory with its surrounding units is a melting pot of ideas, history and colour.

Big Bulls Head is a top notch ‘local’ in Brum whereby you will get a flavour of proper Brum life before any gentrification and long may it continue.