I blame the heat.  England aren’t used to the searing temperatures whereas the Irish are far more accustomed to this type of weather hence their demolition job in the 1st Test today.

Murtagh on the dance floor I believe is the phrase in tomorrow’s papers.  Talking of papers, that leads me seamlessly into the title of this post.

It’s so hot that long posts aren’t happening today but, any excuse to get The Jam on this blog, and I’ll grab it with both hands.

439 – Brews Of The World DE14 1BN is the new hipster place in Burton and any bottle shop/bar that makes a play on Bruce Foxton’s second finest piece of work deserved plenty of recognition.

…imagine that, a track that actually doesn’t appear on album.  Mind you, anyone under 30 probably thinks what’s an album?!

I’m pretty sure the joint gaffer of Brews of the World, Chris, who is 44, is a Jam fan although there was a little bit of Classic FM on when I entered at about 3pm today.

It’s basically a specialist bottled beer shop that now has some taps in, as well as seating and is, to all intents and purposes a bar.

The gaffer was great value and very chatty.  They’ve been open just over 18 months and have plans to keep on developing it.

I had a remarkably good pint of Futurist (Siren) although at an eye-watering £6 a pint it should be and is definitely one for the connoisseur.  Mind you, as far as I am aware, nowhere else in Burton is providing this range of beers so they have found themselves a nice little niche in the market.

Talking of connoisseurs another punter came in to join us by the name of Don and, as luck would have it, he happened to be a Birmingham City fan as well and we soon moved on to tales of St Andrew’s.

I reckon there are more exiled Blues fans these days than actually turn up to watch! 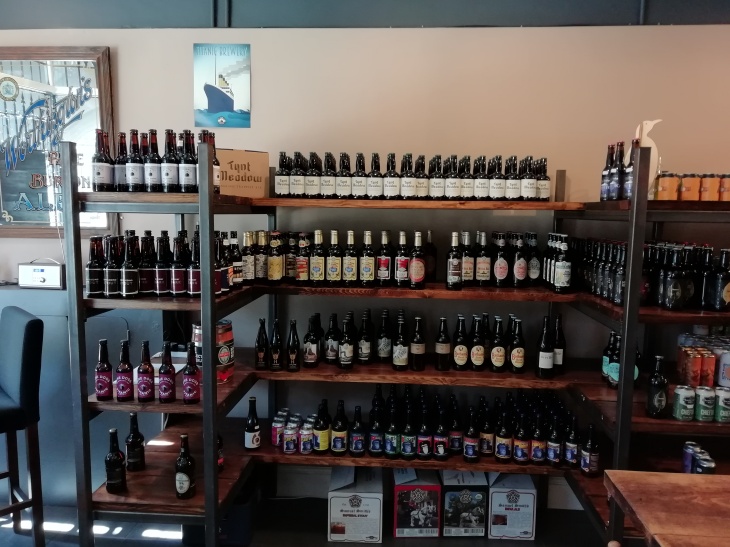 He also joined me on the Siren and Chris and Don then exchanged the perils of a punter who enjoyed the 9% IPA too much and was almost stretchered out recently!

Chris was still good value and a former employee of Marston’s it is quite ironic this is selling its vast array of beer under the shadow of the huge Molson Coors factory.

Let’s be honest, if you’re opening up a new bar in Burton then there is  no point competing with either The Cooper’s Tavern, The Devonshire or even The Dog as they are all classic trad boozers in the ‘home of brewing.’

So, with it being open all day, every day and selling beers nowhere else in Burton does, then I reckon the future is bright.

13 thoughts on “News Of The World”