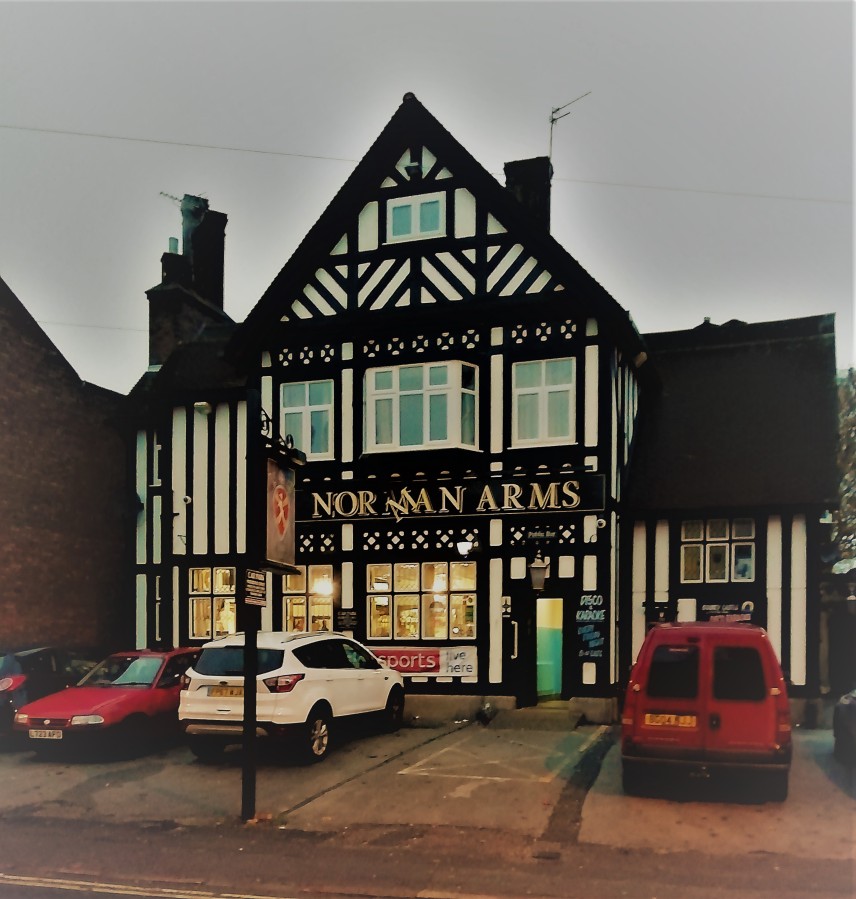 Unfortunately, I’d arrived just too late to watch the groundhopping,  minor league fixture between Cyprus and Scotland on Sky, I’m sure Duncan will fill in the blanks, but the atmosphere was still top notch in an inner city suburb pub kind of way.

Credit for this title goes to Matthew, who came up with the Lazy M idea on Twitter, and I’m more than happy to nick any good ideas as Martin will testify whilst he’s off drinking in earnest Micro pubs in the North West. 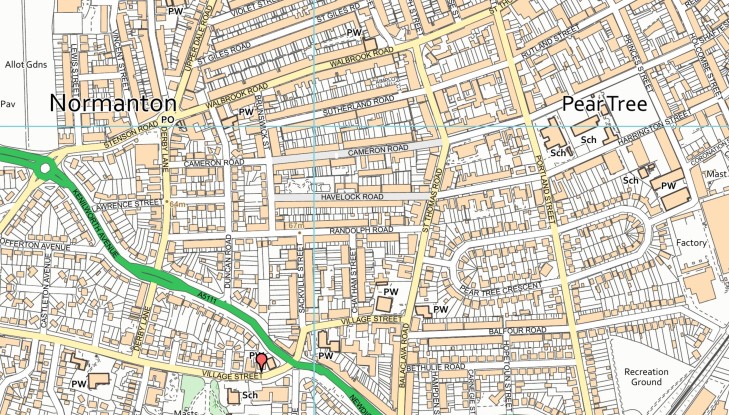 This map gives you some idea of just how many chimney pots there are near The Norman Arms, whilst this one…

…highlights Normanton in relation to the rest of Derby.

Having dropped my lad at Alter Rock (former church converted to a climbing centre) for a party it seemed the right thing to do to check out one of only five Derby Heritage pubs left.

Ye Olde Dolphin Inne, which you can read about here, is the city centre gem whilst the rest are in the suburbs and Normanton is an unlikely candidate to host such a boozer. 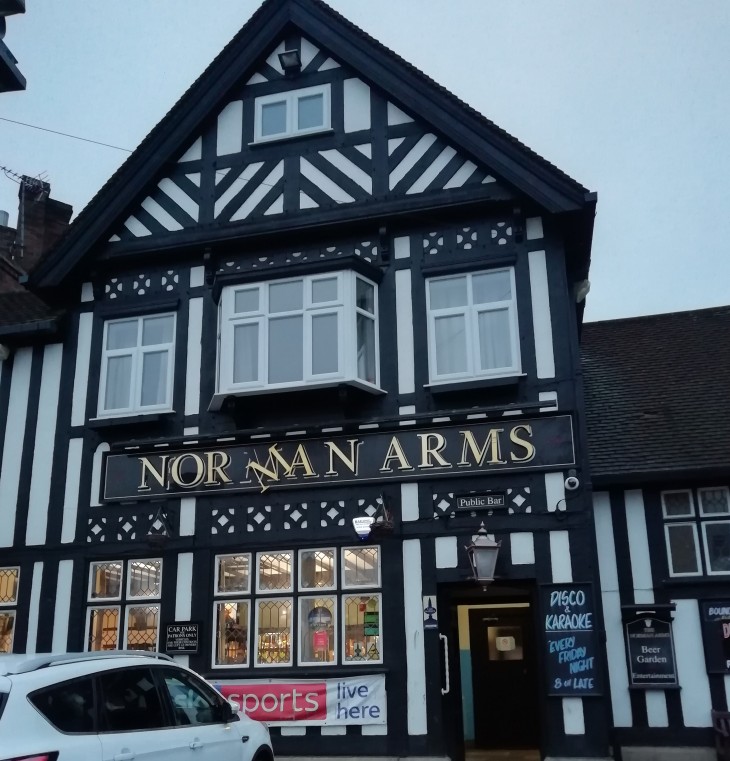 As one of the friendliest boozers I’ve been into for a while, one old boy was telling me about how there used to be three pubs in close proximity, The Greyhound and The Mafeking Hotel, which was a favourite of Derby’s top beer columnist, Colston Crawford

The old boy (not Colston) was lamenting how there was only one left and also said the Norman Arms had been shut/open/shut/open but he still travelled across town to visit his favourite boozer.

It’s a cracking building, with a Mock Tudor frontage I reckon, and my newly acquired pal told me that in the summer, when the beer garden was open, it was absolutely buzzing.

No such joy on this occasion as, whilst the rain relented, it was still Baltic, but the entertainment inside the boozer was too good to miss.

The Crib game was funny and  even though it was piping, one of the punters wore an Arthur Daley style coat that he kept on throughout and the banter was acerbic.

More f***** than a boozer in Coalville and the gaffer of the pub was laughing along as was everyone else as the game continued apace.

I half expected Mark Shirley to turn up and show everyone how it was done but he was conspicuous by his absence.

The only non-Guinness/lager option at the bar was the new craft beer sweeping the nation, John Smith’s Smooth.  To be fair, the old boys have embraced it as this appeared to be outselling the Carling and clearly this is the way forward at just £3:20 a pint.

Bar blockers moved aside, plenty of people asked me how I was, and this was a really friendly, welcoming place.

There were around 20 people in the bar and there was a fair bit of thoroughfare with people coming and going; the only feller who didn’t acknowledge me was one of the darts players.

However, extenuating circumstances meant he couldn’t see me due to the fact he was necking Newcy Brown and warming up for their advertised Sunday darts match against The Crescent.

To be fair, he was beating his pal, who was laughing and in good form but Newcy Brown man was definitely of the Leighton Rees/Jocky Wilson School and played better with a few sherbets inside him. 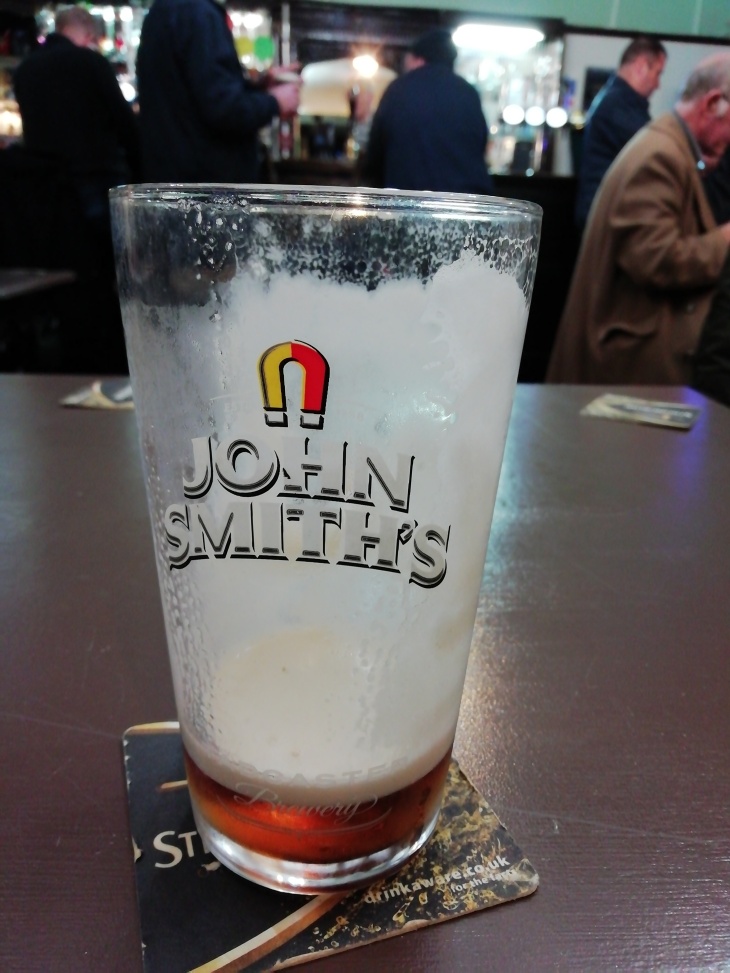 It was top class Saturday afternoon fare with outburst from the Cribbage game interspersed with outbursts from the oche but it was all in good nature and normal everyday pub life.

How long this place will last in Normanton who knows as I was definitely one of the youngest in here but it is providing a service to the local community and the punters playing their pub games along with those watching and having the craic all seemed perfectly happy to me.

Oh yes, just for Dave, no one mentioned beer once hence the reason it had more than five punters in!