Before my sub editors pipe up and correct me for missing Ashby De La from the headline, the title of this post is correct.

I know just how taken Dave is with Ashby De La Zouch so I thought I’d throw him off the scent and stop off at Zouch.

That’s right, in the ever confusing world of Midlands place names there is a hamlet called Zouch, not in Leicestershire like Ashby De La Zouch, but next to the Zouch Cut canal in Nottinghamshire.

Zouch has never had so many mentions in one article (apart from its Wiki page of course) and its claim to fame is that, alphabetically, it is last in the list of all named settlements in Britain.

Apparently, whilst Ashby (De La Zouch) was named after the La Zouche family during the reign of Henry III, Zouch is slightly less exotic as it derives from the English term for poor ground.

Russ’ version wasn’t suitable for a family blog, so the origins of Zouch may well remain a mystery. 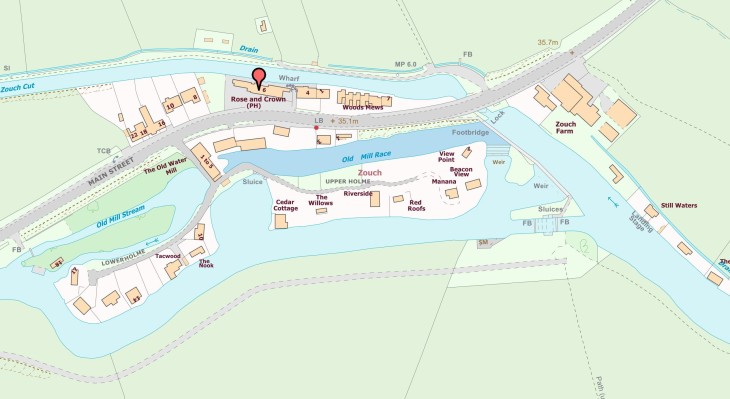 As you can see from this map it is plonked between the River Soar and the Zouch Cut with the 492 – Rose & Crown LE12 5EQ taking up a prime roadside and canalside position.

I can imagine Pete Allen meandering past here at a leisurely pace and popping in for a pint as it is an old school style of boozer as opposed to gastro.

There were workmen in sprucing the place up but the main bar area had three punters in laughing and joking with the conversation turning to bikinis!

The Landlady was top notch as in between stoking the fire and keeping her regulars amused she pulled through a large jug of London Pride (Fullers) which meant my half was absolute nectar.

As it was around 2pm on a Thursday I was probably one of the first punters drinking Pride so she was happy to make sure it was in fine order.

The fire was on, the conversation was good and a music mix to delight all fans of Gold or Smooth FM was on in the background.

Old school roadside pubs are less frequent nowadays and with this being both canalside and a riverside boozer it should pick up a fair bit of trade.

Putting it in context though it is so small it doesn’t even get a mention on this map of all things important near East Midlands Airport.

So, a top class gaffer, friendly punters, good well-kept beer and a canalside location….ok it’s not quite Ashby De La Zouch but it’s probably easier to get too and much easier to pronounce.