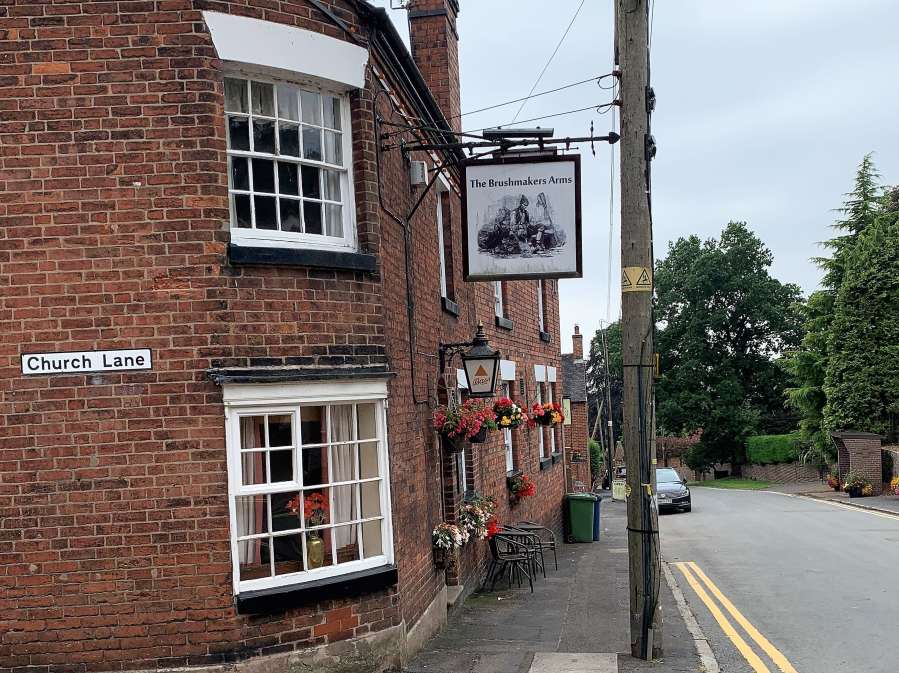 Always nice to bring up a century and my 100th Staffordshire boozer is a cracker.  Derbyshire is still my most visited county but Staffordshire is coming up on the rails of Leicestershire and the West Midlands as it has finally reached three figures.

Anyway, when I say a cracker, I mean one of those wet led pubs that is seemingly oblivious to change and carries on regardless with a winning formula.

I reckon I hadn’t been to 654 – The Brushmakers Arms ST15 8UW in Oulton since the mid-nineties but it looked pretty much as I remembered.

It’s obviously had a lick of paint and is very well kept but it looks like a ‘proper pub’ of the Alan Winfield variety and is named after a local cottage industry.

According to the sign underneath the Bass lamp, the landlord is Mark Byrne and we got chatting about the future of wet led pubs.

He’d been at the helm for 38 years and knew my mate’s name immediately who introduced me to this pub back in 1995.

He not only served a top class pint of Pedigree (Marston’s) he knew exactly the right time to come over and chat and had that gift of putting you at ease.

Inevitably, we had the obligatory covid chat and he said it was easier for him to absorb as he’d been here so long and the mortgage was paid but wondered how others would keep going.

We also discussed whether there would be any pubs like the Brush left a further 26 years from now (since my last visit) as we thought then when our age group (middle aged clearly in my case!) had gone, would there be demand for a pub that basically just sells beer and you can have a chat in?

(A standard afternoon out for Stafford Paul)

Maybe it will be just tap houses/Micros and I can see that some Micros are morphing into versions of The Brush, albeit with slightly less impressive buildings, so perhaps there is a future for wet led pubs.

Talk of Stoke and Stone Cricket Club and all things Potteries were order of the day, a couple of locals left, another one came in, and sat by the bar (hooray) and the Gaffer knew everyone by name.

A great place as Oulton is an outpost in the Moddershall valley wedged between Stone (large town) and Kibblestone (small hamlet). It has around 650 residents and also possesses another pub next door to The Brushmakers, known as The Wheatsheaf.

This cricket festival proves there is plenty of friendly rivalry between the pair but I love the fact that in 2021 England can still have two pubs next to each other in a village that isn’t overrun with chimney pots or shops.

Let’s hope someone else is blogging (or whatever it is in 2046) on this place celebrating its old skool approach as it really is a gem.