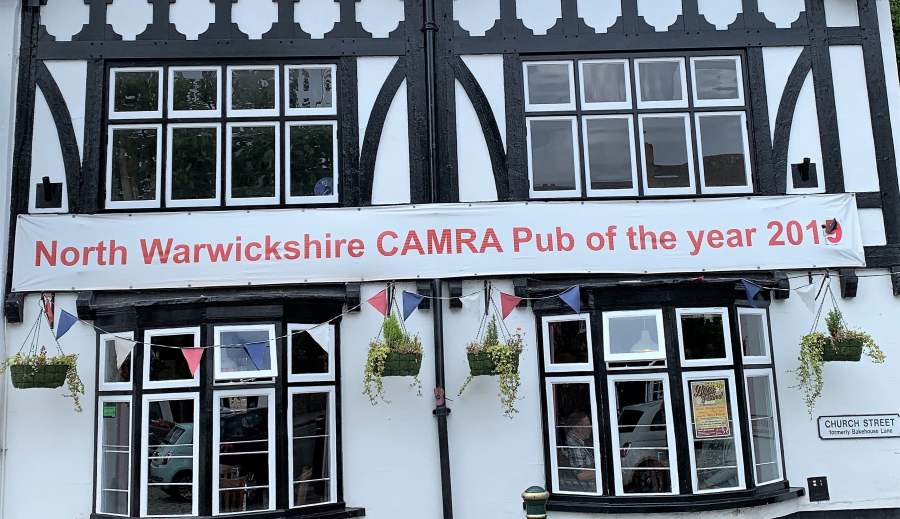 It’s official! Martin has taken over my role as estate/backstreet pub man…The mantle has been up for grabs since the late great Alan Winfield left us and I reckoned I was in the frame.

However, to be fair to The Wickingman he called it a long time ago that I was gradually being drawn into the gastro/prosecco world so enjoyed by the likes of Dave Southworth, BRAPA, Pete Allen and Mark Shirley.

Paul WME runs me close as he visits lots of gritty pubs whilst Tamworth Mark – with his pub on Tamworth blogs – must also be in the frame as we all know Tamworth only has estate pubs.

Nonetheless, Martin is a GBG guru along with Duncan and Si, which incorporates Brunning & Price pubs along with lots of gastro style, crew company jumper wearing Surrey restaurants.

But, he recently visited both The Cricketers Arms and The Royal George in Small Heath which showed the credentials needed to be a #pubman.

On a recent trip to Atherstone I have to confess, for the first time in LifeAfterFootball history, I actually walked past a pub and took the ‘safer option.’

It was a Sunday at about 4pm and I know nothing about this market town except that Tamworth thinks it’s more pukka. I also recall the football team used to be decent and played at Sheepy Road (I reckon Duncan’s been there) and once beat Hereford in the FA Cup…I also played in a charity game at aforementioned ground against an Emmerdale XI back in the noughties but that’s for another blog!

(toilet humour in The Angel)

So, I rocked up after a football function in Solihull and walked past the New Swan…it was banging with “Pump Up The Jam” by Technotronic blaring out (I kid you not) and loads of noise and people straggling out onto the street.

Normally, this would have been the green light for me to go in but I decided to head for the more placid option at the end of the Market square.

Has my bottle gone?  Has reaching 50 meant I automatically order a pipe and slippers?  Have I finally joined the pashminas and pizzas gang who love a pineapple infused DIPA?

Anyway, my radar took me towards the frequent CAMRA pub of the year winner 658 –  The Angel Ale House CV9 1HA.

In my defence I don’t think there is anything remotely foodie about this pub beyond a packet of scratchings so it is a pukka boozer, but definitely less edgy than The New Swan, or The Vine for that matter.

However, the beer was magnificent and Citra (Oakham Ales) was top class.

There were people in the pub and also in the Market Square drinking and chatting and there was a good range of ages.

They also have a top class record player/gramophone (Not the 9 O Clock news anyone?)

and the landlady decided to put the stylus on and…Robbie Williams emerged with Angels!

I was tempted to shout over for “The Crack” by The Ruts but everyone seemed happy enough with Take That so who am I to argue?

A great boozer on a Market Square that seems to have a nap hand of pubs and I reckon Atherstone would be good value on Friday/Saturday (and possibly Sunday) night.

A top notch West Midlands/Warwickshire pub that ticks all the boxes and shows me I should be joining CAMRA!

Martin is the new doyen of estate pubs…